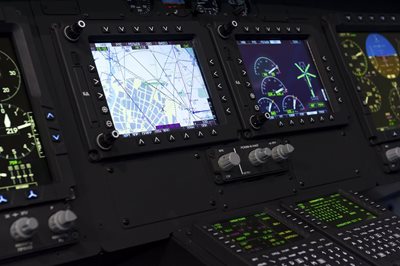 The human machine interface (HMI) is a complex domain that demands consideration at a system level. Developing an interface for a defence application could literally mean the difference between life and death.

There is growing acceptance across all industries that a HMI should be considered as a sub-system, rather than a component in larger systems. The difference isn’t just semantic; it acknowledges that a HMI is a critical part of a product with many complex aspects that need to be thought of systemically. HMIs also meet the classic model of a system: inputs, processes, and outputs.

The processes in question will marry the operator’s intent to the equipment’s functions, ideally in an intuitive way that obscures the complexities of turning one action into another. As such, designing any HMI demands an appreciation for many, sometimes conflicting requirements. When that HMI is intended to control equipment used in the extreme environments encountered by the military and defence agencies, the challenge is further compounded.

The basic requirements of any HMI focus largely on an intuitive design that allows the operator to connect an action to a reaction without having to question the process. For example, a switch dedicated to power is depicted by a symbol comprising a circle intersected by a vertical line. On its own it makes little sense but it has become a universally accepted symbol for power. As HMIs are, by their nature, predominantly bespoke designs it isn’t feasible to represent every function with a common symbol, so the design of an HMI — including where the controls are located on the panel — goes far beyond aesthetics.

In a combat situation, where operator reaction times can be critical, that level of intuitive control needs to be maximised. Standards exist to help ensure this, such as MIL-STD-1472: Human Engineering, which imposes considerations for human criteria in the design of systems, equipment and facilities. But standards can only help regulate the process: the fundamental design requirements still need to be understood and met.

Of course, all electronic equipment is subject to wider regulation in terms of EMC/EMI and safety, and these apply to HMIs designed for extreme environments, as well as the military and defence industries. In fact, equipment designed for use by defence agencies can be exposed to the most extreme conditions possible: high and low temperature excursions, shock and vibration, dust and particle ingress, as well as fluids and liquids ranging from water to corrosive chemicals.

Very few industries demand as much design resilience as military and defence. As warfare evolves, the types of technologies used in equipment designed for the theatre of conflict and defence become more sophisticated and, in many cases, more susceptible to extreme conditions. This puts greater pressure on the equipment itself and its interfaces. As with every other aspect of modern life, wireless connectivity is also a factor: the concept of ‘fly by wire’ puts the control of equipment such as unmanned air vehicles (UAVs), or ‘drones’, in a control room far from the equipment being controlled. This introduces design considerations such as synchronisation, as well as building interfaces that are capable of providing a higher level of automation of the equipment under control.

All systems are becoming more complex as trends like the IoT take hold. Military applications are not exempt from this and are typified by the term C4ISR, or Command, Control, Communications, Computers, Intelligence, Surveillance and Reconnaissance. Systems categorised as C4ISR can comprise millions of networked sensors that feed back to control centres, giving commanding officers and soldiers access to vital information and insights into the situation at hand.

Technologies similar to those now found in consumer applications are also being used in non-tactical environments to track assets, for example. This includes RFID tags, as well as wearable technology. As equipment becomes more connected and more capable, the role of the HMI becomes one of centralised coordination, which, often, may also need to be mobile and rugged.

The technologies being adopted in HMIs reflect this fact; it is now necessary to control and monitor complex systems using a single, flexible interface. To integrate this level of control into a rugged panel can be challenging, as it brings together a wide range of technologies such as membrane keypads, conventional push buttons and touch-screens. Few companies are able to offer design and production services that focus on HMIs at this level, but TT’s design centre for HMI technologies was opened in 2015 specifically for this reason. The engineers at the design centre have already been instrumental in developing a number of innovations such as thin-film backlighting and capacitive switch modules.

The keyboard represents a uniquely flexible form of interface: replacing dedicated switches with soft keys (sometimes in collaboration with an overlay) provides a unified yet adaptable way of controlling multiple functions and devices from a single position.

The development of membrane keyboards addresses ingress and can provide a rugged solution for many applications. Modern solutions also allow for the incorporation of other technologies such as joysticks, tracker balls or touch pads, as well as electro-mechanical switches if required. Membrane keypads provided by TT Electronics can be sealed up to IP65, IP67 or IP69K, include tactile or non-tactile feedback, as well as overlays that are resistant to both chemicals and UV. Surface-mount LEDs can also be embedded within a membrane assembly, while still offering interchangeable inserts.

Operation rooms are often carefully controlled environments, so the ability to add flexible backlighting to a user interface can be vital. The use of thin-film backlighting in HMIs is well established and our patented technology supports fully bespoke design of illuminated control panels. The low profile backlight (typically 1.5mm) can be used in panels with a thickness of up to 13mm manufactured from glass, acrylic or polycarbonate, making them ideal for hostile environments. The technology also supports the integration of capacitive switches, slider controls, joysticks and tracker balls, as well as displays. This class of technology offers an unrivalled ability to create configurable and adaptable user interfaces: as a result traditional electro-mechanical switches are being superseded by solid-state technologies. The challenge is in making HMIs that are able to operate reliably in extreme environments, much more extreme than the average consumer device would experience.

Capacitive switching touch technology, as used in displays, offers several benefits over resistive solutions, which it has largely displaced in the consumer and industrial sectors. This is due, in part, to the ease with which capacitive touch technologies can support multi-touch, but it is also because resistive touch is still effectively a mechanical technology, where two substrates must physically touch in order to register an action. This can present a weakness in ruggedised applications that are exposed to physical stress, however the simplicity of the technology means it can be used when the operator is wearing gloves; still an advantage in some situations. Projected capacitive touch, on the other hand, simply requires a conductive object (such as a finger or stylus) to come in close proximity to the surface. Each has its place in applications exposed to extreme environments and TT Electronics can provide both technologies.

By combining all these technologies with more than 30 years of design and manufacturing expertise in HMI, TT Electronics is able to provide a complete custom control panel service to meet the needs of any application in the aerospace, security, space, and defence sectors, with quality assured via its SC21 (Supply Chains for the 21st Century) accreditation.

Flexible lighting strip to be demonstrated in Hamburg

Meeting the demands of HMI technology in Air cabin design