Posted by Smail Haddadi, Field Applications Engineer on Jan 20, 2019
and

Find out how to calculate the specifications needed and what trade-offs are possible for choosing the right inductor.

Learn more about our electromagnetics capabilities.

In automotive electronics, there are around 80 different electronics applications, each needing their own stabilised power rail, derived from the battery voltage.

While this can be done with large, lossy ‘linear’ regulators, the efficient approach is to use a ‘buck’ or ‘buck-boost’ switching regulator, which can be 90+ percent efficient and compact. Switching regulators of this type always need an inductor and the selection of the right part can sometimes seem a little mysterious with calculations that originated in 19th century magnetics theory. Designers would like to see an equation into which they can ‘plug-in’ their performance parameters and get the ‘right’ inductance and current rating so they can just select from a catalogue of parts. It’s not that simple though: some assumptions have to be made, trade-offs considered and often multiple design iterations worked through. Even then, the ideal part may not be available as standard with the design needing re-work to see how an off-the-shelf inductor might fit.

Let’s consider the buck regulator (Figure 1) where Vin is the battery voltage and Vout is a lower voltage processor power rail. SW1 and SW2 alternately open and close. The simple transfer function equation is Vout = Vin.Ton/(Ton + Toff) where Ton is when SW1 is closed and Toff is when it’s open. You can immediately see that the inductor doesn’t figure, so what effect does it have? Simply, it needs to store enough energy while SW1 is on to allow the output to be maintained while it is off. We could calculate energy stored and equate it with energy required but actually there are more practical things to consider first. The alternate switching of SW1 and SW2 causes current to ramp up and down in the inductor forming a triangular ‘ripple current’ on the average DC value. This ripple current is sunk into C1, which releases it when SW1 is off. This current through the ESR of the capacitor produces output voltage ripple so if this is a critical parameter, and your capacitor and its ESR are fixed by size or cost reasons, this might set your ripple current and inductor value. 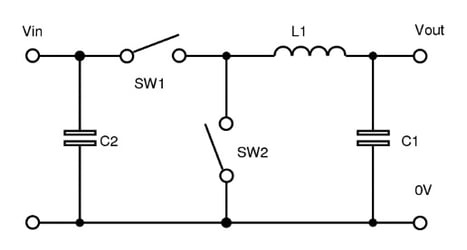 Often there is flexibility in choosing the capacitor, so if the ESR is low, we can let the ripple current be high. This does have its own problems though; if the ‘trough’ of the ripple touches zero at some light load and SW2 is a diode, as is often the case, it stops conduction for part of the cycle and the converter enters ‘discontinuous conduction’ mode. In this mode, its transfer function changes and becomes more difficult to stabilise optimally. Modern buck converters, however, normally use synchronous rectification where SW2 is a MOSFET which, when on, can conduct drain current in both directions so the inductor current can swing negative, maintaining continuous conduction (Figure 2). 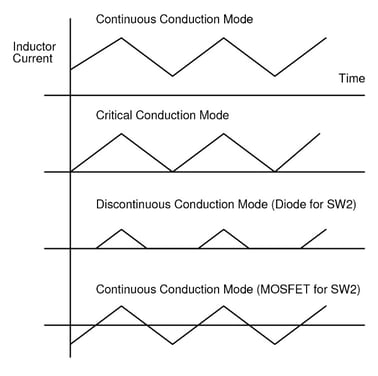 We can allow the peak-to-peak ripple current ΔI to be high in this situation and it is set by the inductance value according to ΔI =ET/L. E is the inductor voltage applied for time T and its easiest to consider what happens in the off-time for SW1, Toff, when E is the output voltage. Toff is maximum with highest input voltage from our transfer function, so Δi is maximum at this point too. Putting example figures to it, for a maximum battery voltage of 18V, an output of 3.3V, a switching frequency of 500kHz and a peak-to-peak ripple of 1A, L calculates to 5.4µH. This assumes no voltage drop across SW1 and SW2. Notice that the load current hasn’t figured in the calculation.

A quick search amongst the catalogues might show many parts with a current rating that matches your load. Remember though that the ripple current is superimposed on the DC value, so in our example the inductor current will actually peak at 0.5A above the load current. Inductors are rated for current in different ways, either as a thermal or magnetic saturation limit. Saturation must be avoided at the peak current and the limit reduces with temperature. Thermally limited inductors are often rated for a given temperature rise, typically 40°C and can be run at higher currents if cooling is available. Careful examination of the inductor data sheet curves is necessary to check whether it is saturation or thermally limited.

Another consideration is inductor loss. When ripple current is low, losses are mostly ohmic and can be calculated. At high ripple levels, core losses start to predominate and are difficult to predict, depending on waveform shape as well as frequency and temperature. The real test is on a prototype, which might show that lower ripple currents are necessary for best overall efficiency, requiring more inductance and perhaps higher DC resistance – it’s an iterative process.

For our example, a good starting point would be the high-performance HA66 series from TT electronics [1] (Figure 3). The range includes a 5.3µH part rated for saturation at 2.5A, allowing a load of 2A with the +/- 0.5A ripple we set. For automotive applications the parts are ideal, with AECQ-200 certification from a company with a TS-16949 approved quality system. 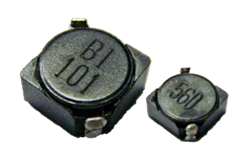 Figure 3. The HA66 series of inductors from TT Electronics

Check out our complete offering of electromagnetics.

An Introduction to 3-Axis Transmitter Coil

How to Choose the Right Inductor for DC-DC Buck Applications