Why Aircraft Health Monitoring is Good News for Airlines and Passengers 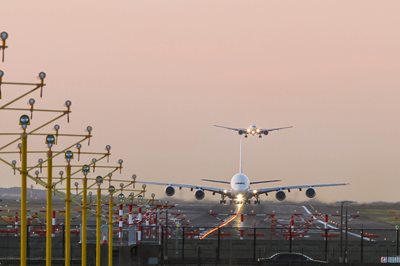 When catching a flight, none of us want to suffer a delay or cancellation. These cost airlines dearly in terms of the knock-on costs of alternative flights, hotel bills and compensation.

Plus there is the additional cost of bad PR and poor customer retention. After all, an airline's best advertisement is a happy passenger – and its worst is a disgruntled one!

From an airline's point of view it also makes sense to keep the cost per mile of operating its aircraft as low as possible to maximise its profits.

So is there a way to predict failures on an aircraft before they even happen? At TT Electronics we think there is.

We are using our expertise in sensor technology and monitoring to develop new ways of detecting the impending failure of aircraft components.

After all, we have one of the widest sensing portfolios in the industry, providing reliable standard and custom sensing solutions for the industrial, defence, oil and gas, process manufacturing, medical equipment, and off-road transportation sectors.

But just how can aircraft health monitoring detect problems before they occur? And what can TT Electronics and its sensor technology bring to the table?

Let's take a simple example. By monitoring, say, the current consumption of part of an aircraft's electrical infrastructure it could be possible to detect when it is out of its normal range.

For example, an abnormal current consumption could indicate a failing bearing or a problem with a motor or its wiring. An out of range temperature reading at the same point might confirm the problem.

By using real-time in-service monitoring you could indicate a potential future failure. An aircraft's ground maintenance team could then be alerted, saving a costly “aircraft on ground” event in the future.

Our product portfolio also includes sensors for temperature, position and torque, pressure and flow measurement to name a few. But we are taking this technology even further, by developing ways of monitoring AC waveforms. We can look for possible spikes and noise in the waveform that could indicate a problem, say, in the power generation system.

This isn't trivial as you have to able to detect a potential problem when there might be noise and electromagnetic cross-talk from other electrical cabling nearby.

But we can achieve it by using our skills at electrical filtering so that we only see the effect we are trying to monitor. And we can also use our expertise in optoelectronics and fibre-optic cabling, which is immune to electrical interference and cross-talk.

Another challenge is dealing with the range of temperatures involved during a flight, which could vary from -55 degrees Celsius to +90 degrees.

Luckily, our experience in producing sensors for the space industry means we are well placed to handle these extremes. In fact, this is nothing when you consider that one of the sensors on a satellite could go from -200 degrees Celsius to +200 in just a few seconds as the spacecraft rotates to face the sun.

While modern aircraft like the Boeing 787 Dreamliner are capable of generating Gigabytes of data on every flight, there are a host of older aircraft that could benefit from the fitment of after-market sensors and data collection.

Our ultimate goal is to produce a database of “normal range” data points for a whole aircraft. That is, you could have a database for, say, an Airbus A320 that shows just how systems on a fit and healthy aircraft behave.

Then, by comparing the sensor output on one particular aircraft with the database it should be possible to detect potential failures before they happen.

These data can be stored on the aircraft for wireless download when it lands or sent to the ground in real-time via a satellite downlink.

As aircraft become more complex and increasingly “more electric” there will be greater opportunities to introduce this technology.

A modern Boeing 787 Dreamliner, for example, has around five times the power requirements of its big brother the Boeing 767. As such there is an even greater need to have real-time health monitoring on its electrical subsystems.

We are working with the leading aircraft manufacturers, as well as leading academic institutions, to develop this technology as fast as we can.

A recent report on the global aircraft health monitoring systems market predicted it could reach $4.71 billion by 2021. It says factors such as passenger traffic growth and increasing aircraft deliveries are fuelling the surge.

Ultimately, health monitoring and a move to “big data” will result in aircraft becoming more reliable, more economical and with reduced maintenance down-times and costs – which is good news for airlines and even better news for passengers.

The complete soldier communications solution from one supplier

Why aircraft health monitoring is good news for airlines and passengers

The drive towards more electric aircraft